He represents the aspect of God that continuously dissolves and recreates the universe. Lord Shiva is often misconstrued as being the destroyer this is misleading as what he is doing is fixing a broken universe in preparation for its renewal.

Goddess Parvathi  is the wife/consort of Lord Shiva. They have two sons Ganesha and Kartikeya.

Shiva Lingam which is a symbol of Lord Shiva is often worshipped instead of the human form of the Lord. Many Shiva Temples have the Shiva Linga as the main deity. Shiva Lingams in temples are mostly made of stone and consists of three parts. The interpretation of these parts is varied and controversial. Hopefully the main concept to be taken from the  Shiva Lingam is that God is essentially formless. The typical western sexual interpretation of the Lingam is offensive to Hindus and debases the Lingam. Even if, as many suggest, that it represents the male and female aspects of the lord that should be enough without taking it to the lowest level.

Maha Shivaratri is the most important day for the devotees of Lord Shiva. During that day, the devotees stay awake through out the night praying to the Lord.  All through the day the the most devout devotees abstain from having any food and worship the Lord. After performing the traditional poojas in the morning they break their fast. This day is considered especially auspicious for women.

Lord Shiva in his human form is worshipped as the Utsava Murthi. 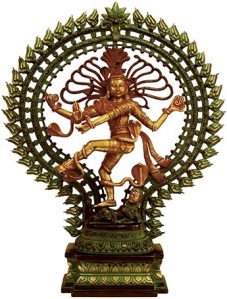 Other names & manifestations of Lord Siva

These are just a few:

Lord Shiva is  compassionate. He protects devotees from evil forces such as lust, greed, and anger. He grants boons, bestows grace and awakens wisdom in His devotees. The symbolism discussed below includes major symbols that are common to all pictures and images of Shiva venerated by Hindus. Since the tasks of Lord Shiva are numerous, He cannot be symbolized in one form. For this reason the images of Shiva vary significantly in their symbolism. These opinions represent those of many sources but interpretations are varied.